Not teaching their kids how to be black in America

Did you know that I had big plans on Leone having one of the hugest, most amazing, most incredible, free flowing heads of hair?  It's true.  I so love his hair that I was convinced he should grow it and grow it and grow it until it just couldn't be grown any more.

A couple of weekends ago we happened to be in an Ethiopian merkato when, pressured to tell me what she thought of my boy's beautiful locks, the clerk made a bit of a face and responded with the words:  "You are going to cut it, right?"

My response?  The jaw dropped.  Down to the floor.

As we drove home Tesoro and I discussed next moves.  I mentioned hearing, via blogland, how other folks had been told that their Ethiopian child/son should have shorter hair.

Did this mean we should join the bandwagon?  And if we should, should we do it because someone who happened to share our boys' culture thought we should?

A couple days later, Tesoro and I got a bug and decided it needed to be done.  Like, now.  Just cut that beautiful hair off and move forward.  See what we thought.  (But do it only because we were deciding to do it... not because someone else told us to... right?)

Needless to say (of course), the wee boy turned out to be quite the good looking kid minus the big hair.  Not that he wasn't good looking before, but this?  This was something completely different.  Not better, just... different.  And amazing.  And... phew.

The kicker is, two nights after we cut his hair, I read the following from the book Weaving a Family:  Untangling Race and Adoption (quick- go out and get this one!):


I was also like a lot of other white women who have black kids:  I liked it [her hair] unrestrained and wild.  And I wanted her to like it.  I wanted my child to love her body, her self, her blackness, just the way she was.  You see a lot of black children of white mothers with wild hair.  I've come to spot them now on the streets.  But now, to my eye now, they look "motherless."

And that's the conundrum:  the little soft baby Afro, the wild young-girl hair, is intended by the white mother as a celebration of difference.  It ends up being a disregarding of culture.  A culture has developed- out of experience of the hair itself, out of a response to racial denigration, and also out of self-love and pride and joy- that tells people how to deal with that hair.  And loose, unbound, wild- that's not it.

When you listen to white folks who are raising black kids talk about it, they sometimes pride themselves on not doing their kids' hair.  They're not the ones who are going to braid that little head of hair into submission.  And for sure, they're not taking out the hot comb.  White folks are too cool to straighten.  They're teaching the kids to love themselves, they say.  And maybe they are.  But they're not teaching their kids how to be black in America.

And then- right at that moment- right as I finished that paragraph, the discussion in the merkato hit me.  And the discussion in the car, where it was mentioned that other Ethiopian women had pushed their thoughts about short hair onto other women I knew who were mothers to Ethiopian children.  And the visit to the zoo, and the pictures on blogs, and walks around the world?  All places where I have seen black children with either loose, big hair or hair neatly trimmed up and/or braided.

And the truth is, the kids I see who happen to have loose, big hair tend to have mothers like me.  Moms who aren't Black.

And that, well, that just didn't sit so well with me.  That general ignoring of culture.  Of ethnicity.

I mean- who am I, the one who happens to be begging for ideas on how to make sure my son grows up knowing how to be Black, if I happen to kick aside words such as those quoted above?  To be ignoring the words of the woman in the merkato?  To be shoving aside the opinions of African American women and Ethiopian American women who happen to live all around me?  Who am I if I ignore these women because I, the European American, want my kid to have big, wild hair... because I think it looks cute and it's so awesome and isn't it incredible and so deserving of celebration?

If I want my son to learn how to be Black in America, I need to remember that this isn't about me.  Not at all.  Not even one teeny tiny inch.  Even when it pains me.
Posted by il panettiere... at 8:25 PM 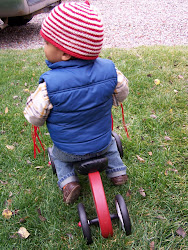